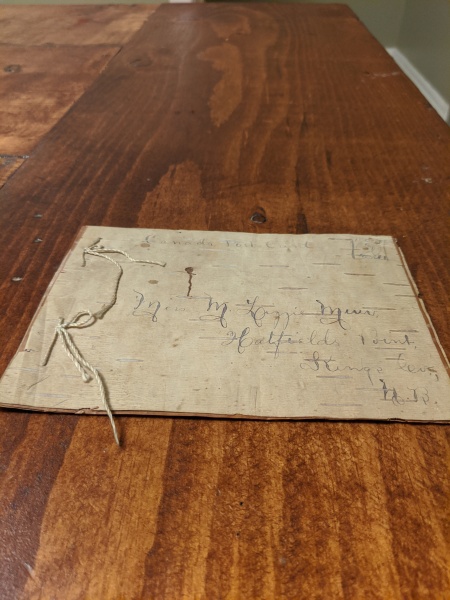 Back in early June, I published a research note on a poem written on birch bark. In an update to that note, I indicated that Peter Larocque at the New Brunswick Museum had e-mailed to suggest that the poem’s author, “Argole,” was probably Arthur Gordon Leavitt, one of the founders of Camp Nature in Nerepis — “ARGOLE is most likely an acronym using the first two letters of each of his names.” I agree that this seems likely, and I was very grateful to receive Peter’s message. I sincerely appreciated all of the information that was sent to me after that note was published.

Because I am currently interested in any and all regional writings on birch bark, I returned yesterday to Loyalist City Coin and asked Donnie, Ross, and Doreen at the counter if they were aware of any other such writings in the store. A binder of novelty postcards contained the following items:

Three pages of bark are bound with two pieces of string. “Canada Post Card” is written at the top of the first page in pencil beside a sketched postage stamp. The document is addressed to “Miss M. Lizzie Muir, Hatfield’s Point, Kings Co., N.B.” The second page includes sketched flowers, a bird carrying a note, and the words “A Message With best Wishes for Many Happy Birthdays” written inside overlapping hearts. The final page is dated “Feb. 15th 1907.” A poem reads:

May you be happy,

Of sin be afraid,

But for “gracious sake” Lizzie,

One sheet of bark; on the front, “Canadian Post Card” is written in blue ink beside a 1 cent postage stamp. The bark has been damaged, so the addressee is unclear, but quite possibly it is the same as above, since “Hatfield’s Point, Kings Co., N.B.” is legible. A postmark appears to date this document March 23, 07 and shows the word “Ogilvie,” which matches the surname of the author from Document 1. The back of the postcard features a sketched flower and text that, save a few scattered words, is very difficult to read. The black ink text includes the words “you send me a mag-nifying glass in the mail.” In blue ink, the words at the very bottom of the page read, “Later accounts. Please send a Hindoo Interpreter.”

“Well is the man who has old clothes

And has a wife to mend them

But better still he has old “doughs”

And has a heart to spend them.”

Numerous thin sheets of bark are adhered together. One side reads, “Souvenir of Rattlesnake Lake Winnipesaukee New Hampshire;” the other begins,

I am sending you a souvenir, taken from Rattel Snake Island on the wonderfull Lake Winnipesaukee that which has as many islands as their are days in the year & this one is uninhabited [?] of the Rattle Snaks so I [?] curious to go on it & Brother took us to see it, he also took us to see the great wreck on the shore of the Lake & I walked through 2 of the cars and sat down on the 2nd one so got a piece of the splintered car for [?] . . .

I found record of a Mary Elizabeth Muir, born in 1894, in the Provincial Archives’ Vital Statistics database, and I believe this is likely the “Lizzie” addressed in these notes. My best guess is that the author, “Mrs. M.P. Ogilvie,” is Lucy Anne King, who married Malcolm Peter Ogilvie in Kings County in 1901. Malcolm died of “Consumption” in 1908 at the age of 32 — after Documents 1 & 2 but before Document 4. They had four children.

Another postcard that I came across, featuring imagery from the 1904 “Champlain Celebration” in Saint John, might suggest that dropping pieces of birch bark into the mail was more commonplace than we remember.