Mihku Paul gave me this beautiful copy of her poem “The Water Road” after I organized a reading for her at the Saint John Free Public Library several summers ago. This now hangs in my kitchen and I look at it when heating bottles of milk for my babies. It’s one of my favourites of hers, but also, more generally, one of my favourite things ever written about the Wolastoqiyik homelands.

And because it’s featured in the wonderful Dawnland Voices: An Anthology of Indigenous Writing from New England (ed. Siobhan Senier), I have the privilege of discussing it with students this week in a third-year Indigenous Literatures course at the University of New Brunswick in Saint John. To some degree, the poem is a response to The Old Meductic Fort and the Indian Chapel of Saint Jean Baptiste, a paper that was read before the New Brunswick Historical Society by Rev. W.O. Raymond in 1897. Raymond refers to a tributary of the Wolastoq River that the Maliseets call “Madawamkeetook, signifying ‘rocky at its mouth,'” and also to a report penned by Abraham Gesner — the Settler geologist who invented kerosene — who noted, in his survey of Wolastoqiyik portage paths, that the “‘solid rocks'” between Meductic and Tobique had been so well travelled that they were “‘furrowed by the moccasins of the native tribes.'” Gesner’s writings on these trails are themselves fascinating, filled with detailed references to awikhiganak, the images inscribed into tree bark that helped Wabanaki peoples navigate dense forests.

Against this incredible image of people traveling, for centuries, down worn and familiar passages, echoing the footsteps and movements of their ancestors, mapping and inscribing their land with their bodies, and leaving written messages, warnings, and instructions for one another along the paths, Raymond consolidates his simplistic idea of wandering nomads. He describes “the Indians of the Maliseet and Micmac tribes” as “a race of nomads, wandering about from one camping ground to another, as necessity or caprice impelled them.” Paul counters his vision of aimlessness with an exploration of her own personal reasons for travelling the water road. Her poem moves from Madawamkeetook down the Meductic trail to the Chiputneticook lakes at the Maine border and to Mattawamkeag, an eastern tributary of the Penobscot — where, Paul writes, “a girl became a woman.” 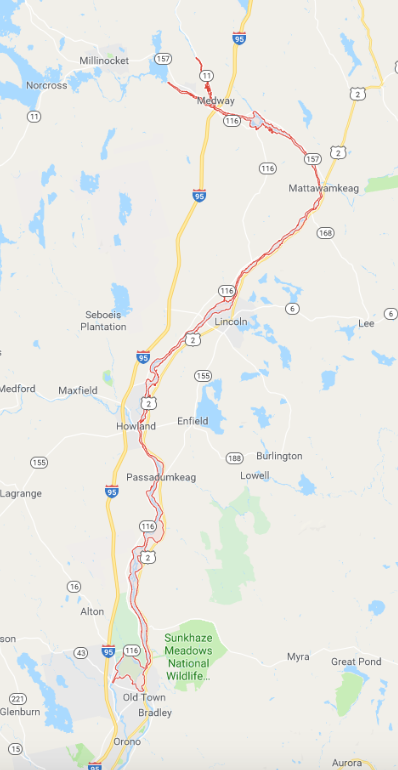 Paul herself grew up primarily in Old Town, Maine, but she also spent portions of her childhood among family at Indian Island, which stretches for miles along the Penobscot River. An enrolled member of the Kingsclear First Nation in New Brunswick, her family’s life in Maine was born of her grandfather’s struggles in the New Brunswick residential school system — experiences that ultimately caused him to flee the province before Mihku’s mother was born.

Paul’s poem speaks of someone who “became a woman” along the Penobscot, but whose “body craves the past, its water seeking / The cool flow, ancestral memory, / Where tributaries meet, flooding / Undernourished roots that cling to her edges / Eroded year by year with forgetting.” And so she follows the “map / Flowing inside [her body]” — from Penobscot to Mattawamkeag, to the Chiputneticook lakes, and up the water road to Meductic, where furrowed rocks speak of old life ways and the purposeful movements of a people who always find their way home.